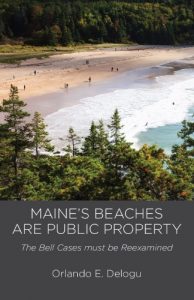 The premise of this volume is that the Bell cases, insofar as they cede title to intertidal lands to littoral upland owners and limit public use rights on such lands, were wrongly decided.  The Bell holdings (and earlier Law Court cases) erroneously ignored ancient law, English common law, rights arising by virtue of Maine’s statehood, the “equal footing” doctrine, and numerous Maine and U.S. Supreme Court cases.  They ignore express limitations on the powers of the Judicial Branch of government.

These judicial errors, whether of short- or long-standing duration, can and should be corrected.  I firmly believe that a reexamination of the errors and issues ignored by the Bell courts will lead a reexamining court to conclude that title to intertidal lands in Maine is held by the state in trust for the public, except for small areas addressed in an amendment to Maine’s Submerged Lands Act–areas actually filed at some time in the past to meet commercial “wharfing out” needs.

No one chapter ineluctably leads to the conclusion that Maine holds title to its intertidal lands, but taken together they make a compelling argument that this is in fact the case.  Each chapter has an extensive set of endnotes that complement and support arguments made in the text–all with an eye to prompting Maine’s highest court (or the U.S. Supreme Court) to reexamine and ultimately overturn the Bell cases.